If you live in the Toledo area and you are looking for mountain biking trails near you, you need to check out the Beach Ridge Trail located in the Oak Openings Metropark.

Take a look at the Metroparks Toledo Mountain Biking web page for more information and links to maps.

The Beach Ridge Singletrack Trail is new to the Toledo Metroparks as of a couple of years ago. I wanted to do a fairly quick video highlighting this wonderful feature that we have in the Toledo area. My name is Dr. Bryan Royer, and this is your Healthy Hands for Harmony.

The Beach Ridge Trail is part of the Oak Openings system and is located out in Swanton, Ohio. It’s a series of loops and it’s connected to the Wabash-Cannonball Trail. Starting at the bottom right corner, and going counter-clockwise, it has the Hognose Loop, the Blazing Star Loop, the Blue Racer Loop, the Badger Loop and the Flying Squirrel Loop. For this video, we started in the Beach Ridge area. We were lucky enough to stay in the treehouses overnight. At the time of this video, it’s a two-year wait to stay in the tree houses. As you can see here, coming up, you’ll be able to see [the Oak Openings Treehouses] off of the actual trail themselves, as they come up. And it’s cool because you can actually watch the bikers riding by as you sit on the deck of the tree house.

If you go back to the beginning, there’s a little green dot that gives you the approximate location of the tree houses. And about where we started from. The park entrance is located at 3520 Waterville Swanton Road in Swanton, Ohio. And if you noticed at the beginning there was actually, some maintenance areas for your bike, and there was also a public restroom that you can find in the Wheelhouse. The Beach Ridge Singletrack Trail is built and maintained by volunteers, and it’s helped obviously, by Metroparks Toledo. There’s a bunch of different obstacles that are there, including this bridge that goes over the trail.

You can see is going to be of the Blue Racer Loop and the Blazing Star Loop. You can see that we started in the green area, and we followed the blue track around those two loops. And then you’ll notice that I’ve added a little bit of an arrow, so you can see the direction that we actually go. The video is moving pretty fast as it was filmed on a GoPro Hero 8, in a time-lapse mode in order to make the video go a lot faster. Basically, it’s going to be too fast for some people, but it helps to crunch the ride down from about an hour to about six minutes worth of video.

Now, the Blue Racer Loop is about 1.95 miles, and you can see that it had the overpass on it. At the end of the trail, there’s actually a jump ramp as well. The Blazing Star Loop is going to be 1.22 miles, which has a teeter-totter on it. Again, you can see that there’s a bunch of different little stunts that are on there. Most of them are pretty much optional so that you can either go on it, or you can actually skip it if you want. This is one of the examples where we’ve walked this one, because I didn’t want to fall off. And neither did I want the kids to fall off of that either. 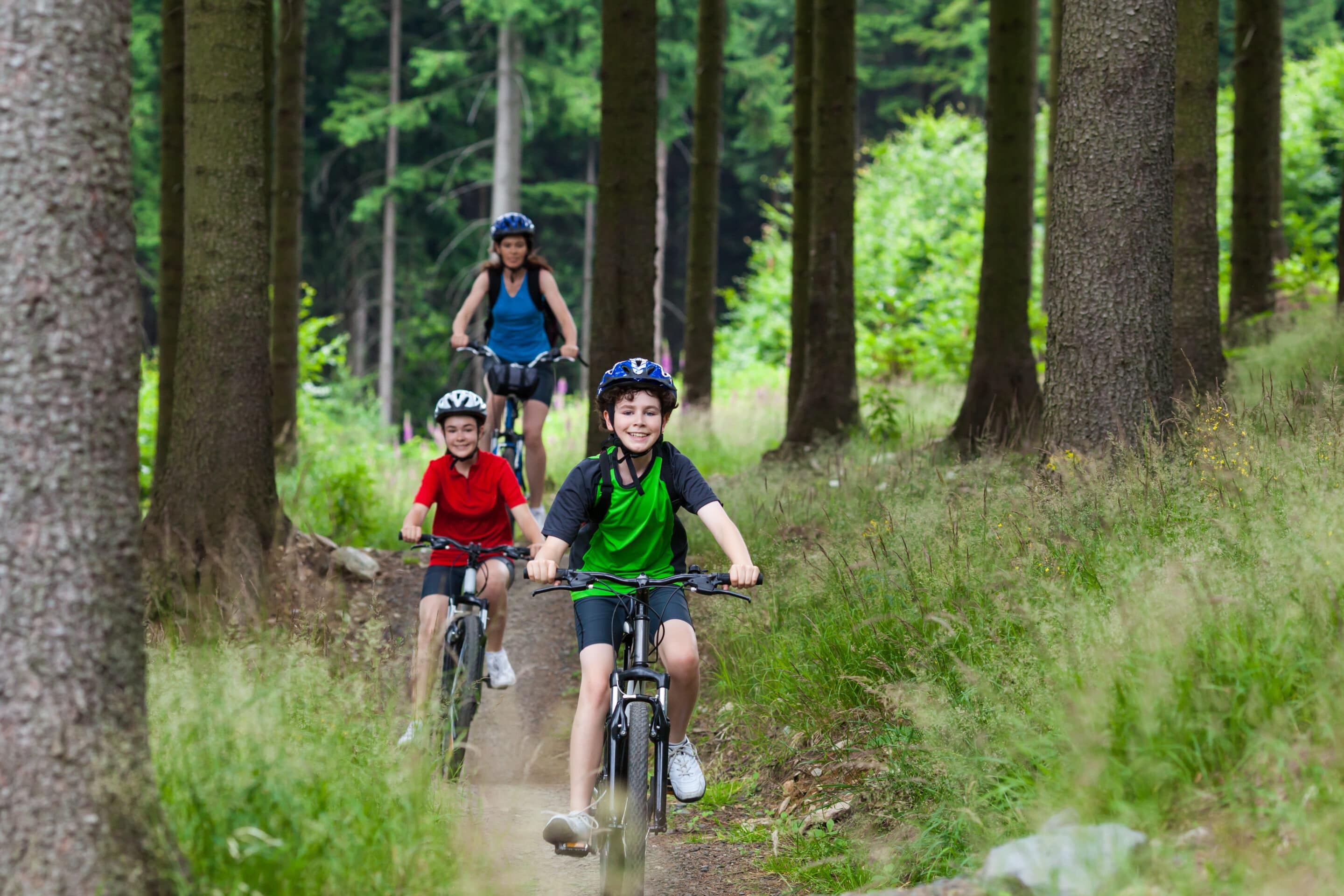 But if you’re unfamiliar, what singletrack means is that bike traffic is only going to be going one direction. This was filmed on a Friday morning. So we went counterclockwise on the loop. And I’m pretty sure that Saturday, Sunday and Monday are going be clockwise. And Tuesday, Wednesday, Thursday, and Friday are counter-clockwise. I’m not sure. So obviously you’d have to check the trailhead for instructions in order to make sure that you’re [going the correct direction]. Now, this is a shared use type of a trail. So, pedestrians can be on the track, and there is currently nothing that tells them which way to go. So, there’s a possibility that people could be going in either different direction. Personally, I don’t think that it’s a great idea to walk on it because there are a bunch of different places that are fairly narrow. But, if you end up do walking on this, then I would recommend going in the opposite direction of the bikes.

There are 12 different types of unique bridges and other kinds of obstacles that are along the way. There are some ups and downs and nothing is going to be super strenuous. But there are some spots that go a little bit faster than others. I can tell you is don’t really expect for there to be a lot of black diamond type of jumps, or drop-offs, or anything like that. This isn’t really that kind of a course. You can see that there are some places like this, where it does make a little bit of sense to get off and walk. And especially because I had my kids with me.

When I rode this course, I rode it with my wife and my two kids. Sometimes you can see me stopping like here, which is where I’m waiting for some of them to catch up. My kids are six and seven years old. My six-year-old rode the course this past summer when he was five years old. And neither of them are really daredevils of any kind. They’re pretty decent at riding their bikes, but they also kind of know when they’re biting off more than they can chew. So, if they see anything that looks too steep or anything that feels like it’s too dangerous for them, they do get off their bikes. There’s been a couple of little falls, no major injuries or anything, by that, from the kids.

That’s a little bit different though when it comes to me because as you’ll see coming up here. I get to that little teeter-totter that’s right there. That teeter-totter, the last time that we did this, I actually tried for it and completely fell off of the thing.

As you can see here, I was super brave and I decided to walk over top of that teeter-totter. Anyway, when I first went over the teeter-totter, I fell off and I ended up cutting up my leg a little bit. And actually, spraining the heck out of my left pinky finger. But got up, I tried it again and I got it the second time.

As I said there are multiple different stunts that you have when you’re going through these tracks. These are a couple of ones that you can pump on in order to build up some speed. And this is again, on the Blazing Star Loop, as well as the teeter-totter that’s on this. The Blue Racer Loop is going to end up having the overhead pass. And then it’s going to end up having the jump ramp that’s on it, but it’s not anything that’s going to be like separated out. So you’re not jumping over open ground or anything like that, but there is a couple of other [stunts]. There’s some drops that are over on the Flying Squirrel Loop. But if you look at the Badger Loop and the Hog Nose Loop, both of those really don’t have a whole heck of a lot of major stunts on them.

I totally encourage people to go on this course. You don’t necessarily have to have a fancy type of mountain bike. My daughter basically has a road bike that has almost bald tires. And she was able to do it fairly well. So, I totally encourage you to go out and visit your Toledo Metroparks, get on the trail, and do a little bit of riding. And hopefully this video has been helpful for you.

Calf strains are a common problem. Any sudden movement can stretch the calf muscle well over its limit, making it difficult to run, dance, or play sports. Calf muscle strains are a type of injury that involves complete tearing or mild overstretching of the muscle....

Not too long ago, I was interviewed for an article regarding posture for the Toledo Blade published 10/09/2022 titled "Good posture helps your physical and mental health more than you may realize". Below is the copy of that article. I do feel fortunate as this is the...

What is Hip Impingement or FAI?

Hips work hard to bear our weight and support our movement. For that reason, problems affecting hips can take their toll on our overall quality of life and affect activities like running. Femoroacetabular impingement (FAI) or hip impingement is one of those problems....

Metatarsalgia is a condition that affects the metatarsal bones in the foot. These bones are located in the front of the foot and support the toes. This foot condition can cause pain, inflammation, and stiffness in the ball of the foot. Based on recent reports, the...

Recently, I was interviewed for an article that appeared in the Toledo Blade on 8/14/22 titled “Chiropractors see themselves as adjuncts to mainstream medicine, not as competitors”. I realize that there is not an unlimited amount of space in Toledo Blade to fully...

Recently, I was interviewed for an article that appeared in the Toledo Blade on 8/14/22 titled “Chiropractors see themselves as adjuncts to mainstream medicine, not as competitors”. Below is the copy of that article. Click here to read my response to the article....